On board this spacecraft is the ASU-led Thermal Emission Imaging System, or THEMIS. The camera measures the surface temperature day and night, allowing scientists to determine what physical materials, such as rock, sand or dust, exist. Its data reveal the presence of these materials based on how they heat up or cool down over the course of a Martian day. The spacecraft also includes gamma ray spectrometer detectors, which measure the amount of different elements on the Martian surface.

NASA’s 2001 Mars Odyssey spacecraft launched 20 years ago on April 7, making it the oldest spacecraft still working at the red planet. The orbiter, which takes its name from Arthur C. Clarke’s classic sci-fi novel “2001: A Space Odyssey” (he blessed its use before launch), was sent to map the composition of the Martian surface, providing a window to the past so scientists could piece together how the planet evolved. But it’s done far more than that, uncovering troves of water ice, serving as a crucial communications link for other spacecraft, and helping pave the way not just for safer landings but astronauts.

“In the past 40 years Mars has gone from a red dot in the sky to a world we have come to know almost as well as our own,” said Christensen. “Mars Odyssey and THEMIS have played a major role in that transformation and it has been a great privilege to have been part of the exploration of Mars.” 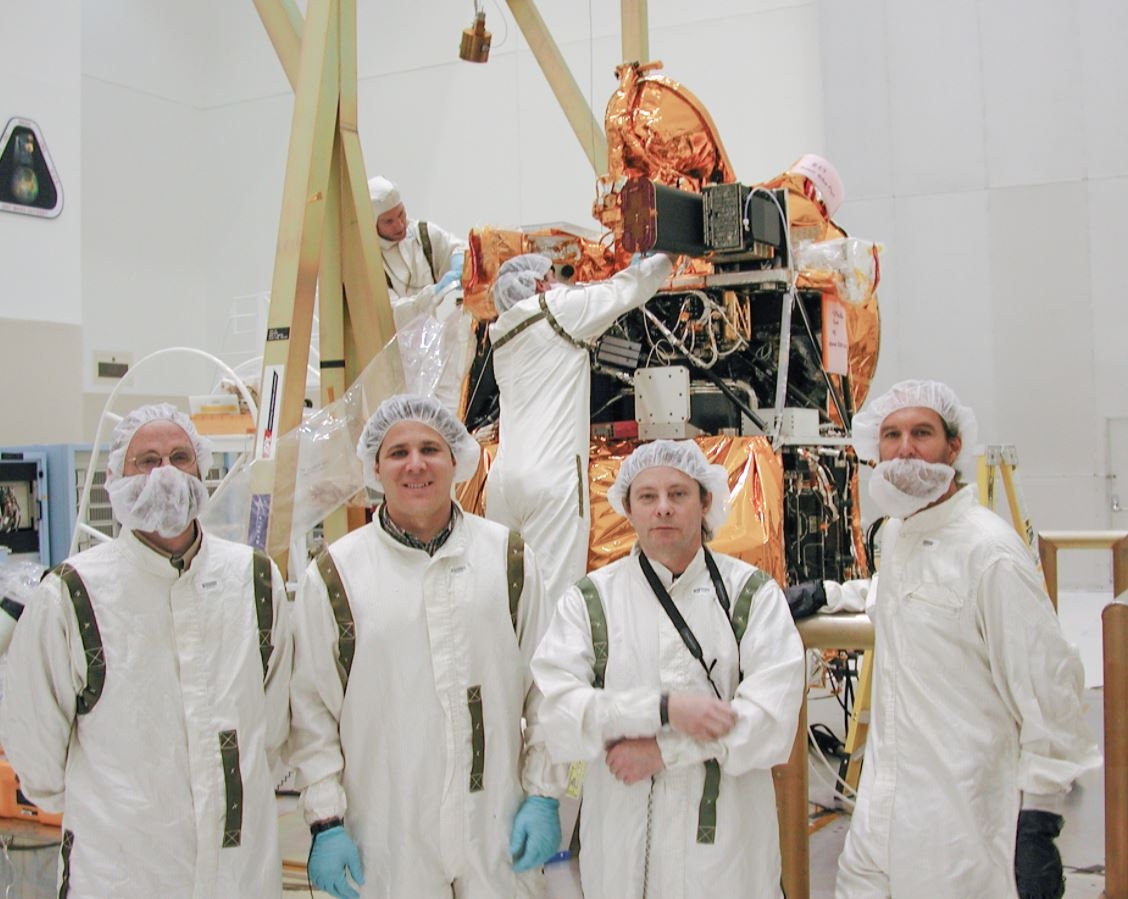 2001 group photo of THEMIS team including (from left) Principal Investigator Philip Christensen with Greg Mehall, William O’Donnell and Steve Silverman with the Mars Odyssey orbiter prior to launch from the Kennedy Space Center.

The orbiter has sent back more than 1 million images since it began circling Mars. Not only have those images and the maps it’s produced helped missions figure out what parts of Mars they want to study up close, it’s helped NASA decide where to land its Mars missions – including the Perseverance rover, which touched down on Feb. 18, 2021.

Odyssey has done such a thorough job of studying the Martian surface that scientists have started turning its THEMIS camera to capture unique views of Mars’ moons Phobos and Deimos. In June 2020, the ASU team published three new views of Phobos, capturing the moon as it drifted in and out of Mars’ shadow. Studying each moon’s thermophysics helps scientists determine the properties of materials on their surfaces, just as they did for the Martian surface. Such information can help offer glimmers into their past: It’s unclear whether the moons are captured asteroids or chunks of Mars, blasted off the surface by an ancient impact.

Future missions, like the Japanese Space Agency’s Martian Moons eXploration (MMX), may seek to land on these moons. In the distant future, missions might even create bases for astronauts. And if they do, they’ll be relying on data from an orbiter that began its odyssey at the start of the millennium.

With 20 years of data, there are mountains of research related to THEMIS, but Christensen does have his own top five list of discoveries listed here in rank order. To read about more discoveries visit the ASU THEMIS webpage.

1. Mars has large expanses of exposed bedrock: THEMIS results show winds have scoured many areas of Martian bedrock clear of sand and dust.

3. Gas jets spawn dark "spiders" and spots on Mars icecap: Scientists use THEMIS data to discover that sand-spewing gas jets are the cause of mysterious dark markings that appear every spring on the Martian south polar cap.

4. Melting snow carved gullies: Water from melting snow eroded many of the geologically recent gullies on Mars — and snowpacks still linger on many poleward-facing slopes in the middle latitudes.

5. Olivine-rich rocks point to cold, dry Martian past: In Syrtis Major, THEMIS mapped the largest known exposure of olivine-rich rocks on Mars. Because olivine decomposes easily when wet, its survival from ancient times suggests Mars has been cold and dry for much of its history.

An Odyssey for everyone

Beyond building and operating THEMIS, the ASU team has developed several tools for the scientific community and for science enthusiasts alike at their Mars Space Flight Facility.

One of the most widely used such tools is a geospatial information system (GIS) called the Java Mission-planning and Analysis for Remote Sensing, or JMARS for short. It has been publicly available since 2003 and was recently named by Oracle as one of the Top 25 Greatest Java Apps Ever Written. JMARS is used by thousands of people, providing mission planning and data-analysis tools to NASA scientists, instrument team members, students and the general public

Not one to rest on their laurels, the Mars Space Flight Facility teamed up last year with Assistant Professor Robert LiKamWa and graduate student Lauren Gold of the Meteor Studio in ASU’s School of Arts, Media and Engineering to launch a new smartphone app called JMARS AR Viewer. Downloadable for free from Apple and Android stores, the JMARS AR Viewer allows users to virtually project planetary terrains from Mars, Mercury, Earth and the moon onto their physical environment.

But the team’s contributions are not limited to the digital platform. ASU Mars scientist Jonathon Hill compiled 24,000 individual images taken by THEMIS to design a basketball court-size map of Mars. The map can be transported to schools and events so science enthusiasts of all ages can “walk” on Mars. The map has even traveled to the National Mall in Washington, D.C., where visitors could take a stroll on the red planet, go on a geographical scavenger hunt and talk to Mars scientists. 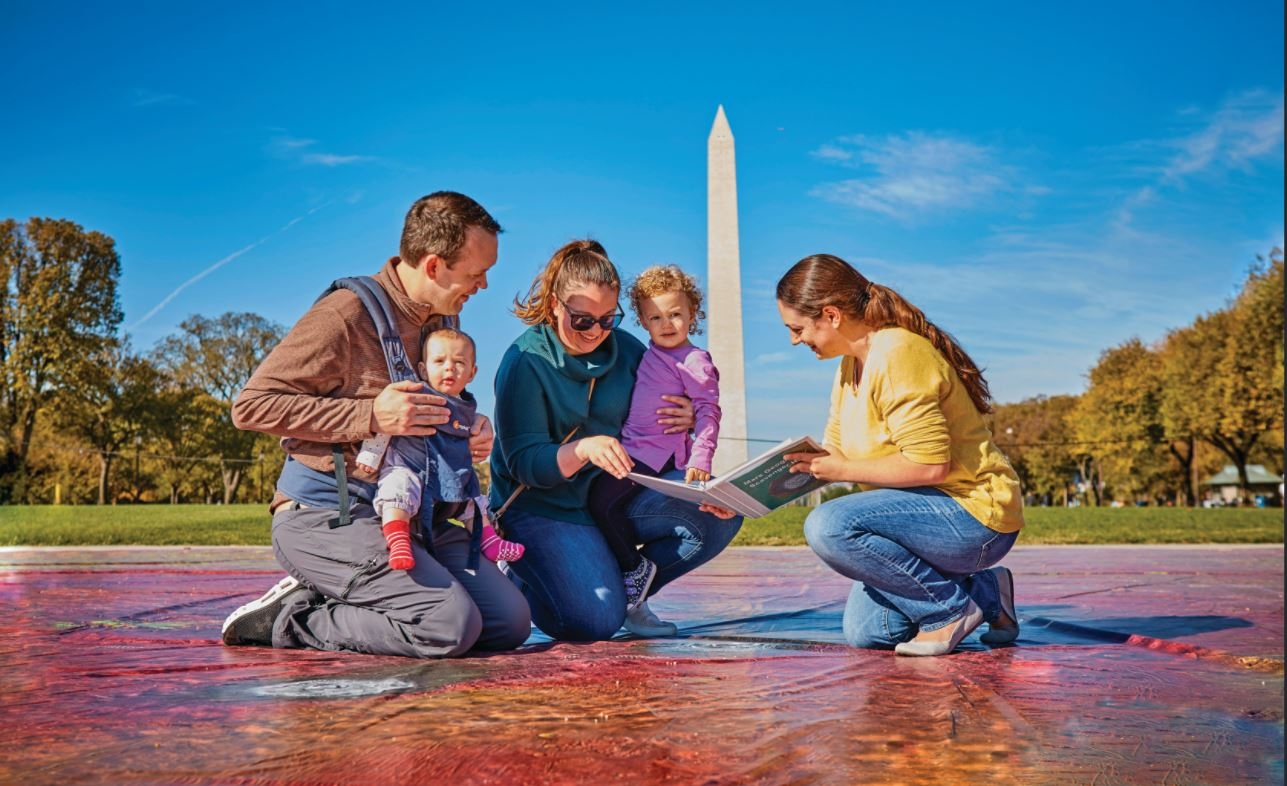 Visitors to the National Mall in Washington, D.C., walk on the world’s largest map of the surface of Mars, created by the ASU THEMIS team. The map is a combination of 24,000 individual images taken from the Mars Odyssey orbiter. The various colors of the map indicate the elevation of different geographical landmarks of the planet. Credit: Aaron Kotowski for ASU

“Mars is a very dynamic and changing place, so we hope that THEMIS and Odyssey will continue to observe the planet for many more years to come,” said Christensen. “Exploration always has surprises so even after 20 years we never really know what to expect in each image we take.”

THEMIS was built and is operated by ASU. Odyssey's Gamma Ray Spectrometer was provided by the University of Arizona, Tucson, Los Alamos National Laboratory and the Russian Space Research Institute. The prime contractor for the Odyssey project, Lockheed Martin Space in Denver, developed and built the orbiter. Mission operations are conducted jointly from Lockheed Martin and from JPL, a division of Caltech in Pasadena.

This story was written by Andrew Good of NASA's Jet Propulsion Laboratory and Karin Valentine at ASU's School of Earth and Space Exploration.