Ariane Middel is from a small village in western Germany where the weather is generally cold and rainy. When she moved to Phoenix in 2009 to do her postdoc at Arizona State University, her original focus was on water modeling research.

But once Middel spent some time in Phoenix, she realized that she was more interested in the climate and in heat, and she switched her focus to a field called “urban climate.”

“As we build cities, we bring in all these artificial materials such as asphalt and concrete,” Middel explained. “And as we change those surfaces, we change the thermal property of the city, and that has an impact on our local climate.”

Now Middel, an assistant professor in the School of Arts, Media and Engineering and in the School of Computing, Informatics and Decision Systems Engineering, has been awarded an NSF CAREER award to further pursue her research in the SHaDE lab, which looks at heat from a human perspective.

The panel that reviewed her work particularly valued Middel’s integration of research and education, with K–12 outreach and a special focus on attracting women to STEM fields, and the academia-practitioner partnerships she is building with cities in the Valley.

“The proposed research will help us understand how people experience heat by including other atmospheric variables, such as mean radiant temperature (MRT),” Middel said. “MRT represents the heat load on a human body and varies significantly if somebody is standing in the shade or sun. We will use an innovative mobile sensor platform called “MaRTy” to measures how people experience heat in Phoenix and Los Angeles.” 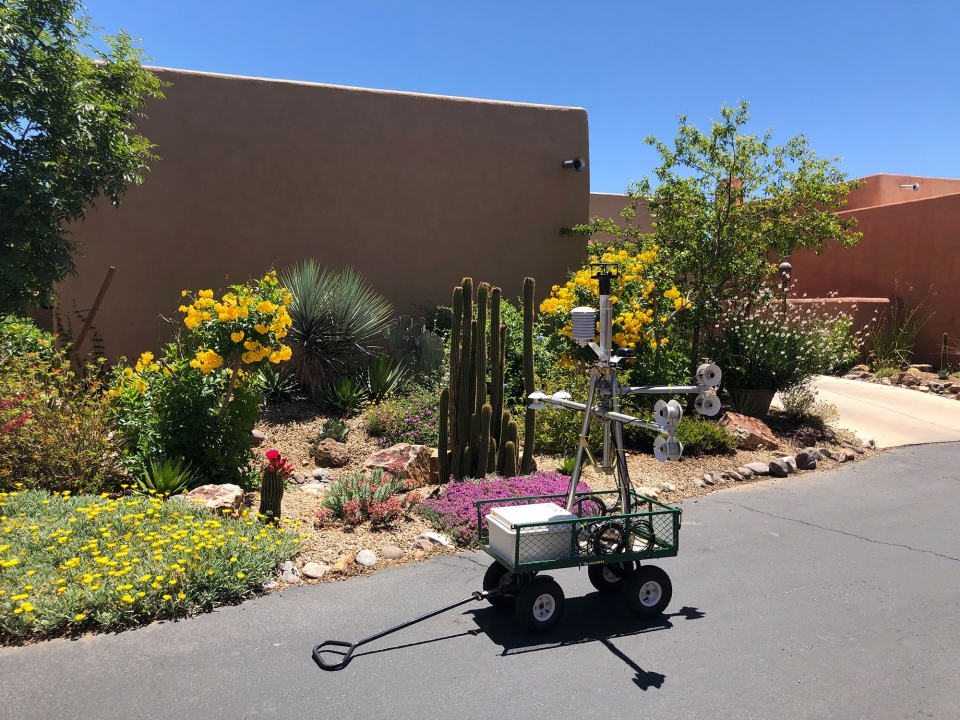 “MaRTy is a fairly expensive setup,” Middel added. “It’s a $20,000 cart. As part of this project, we’re trying to build some low-cost versions of this cart that we call MaRTiny. These tiny versions of the MaRTy will be more like $120. Very affordable.”

"Professor Middel's research has been nationally and internationally recognized for increasing our understanding of urban climates,” said Pavan Turaga, interim director of the School of Arts, Media and Engineering. “The knowledge she has generated is of great value to policymakers and urban planners. Specifically, the work will result in new planning recommendations for the next generation of livable cities, with special emphasis on modulating and mitigating the human experience of heat. Her work is already being deployed in Phoenix and Los Angeles as well in cities across the world, such as Kolkata and Tokyo. In the longer term, her work will influence lives in urban centers across the world, many of which are grappling with the effects of thermal extremes."

It was after Middel moved to Phoenix, she said, that she understood heat as an invisible hazard that urban desert dwellers have to live with.

“Heat is the No. 1 weather-related killer in the U.S. It’s not like an earthquake or a flood or something disastrous that comes in and kills people. It’s this silent killer. There are a lot of people who are not going to be fine (in the heat) because they can’t afford to run AC. For those people, it’s really important to investigate how urban form and design can be used to mitigate heat.”

Middel says the city of Tempe, among others, has been an active collaborator in assessing parks and other public areas. Her hope is that the cities can use the findings from her research to inform their design guidelines for the amount of shade a path or a playground should have.

“I am very excited about this project,” Middel said, “because it can actually lead to change in our communities. I really hope that outcomes of this project will not just collect dust on a shelf but will lead to actionable best practices for urban infrastructure management and human-centric heat hazard mitigation.”

Middel credits ASU with offering her “a vibrant research and education space” in the School of Arts, Media and Engineering, a collaboration between the Herberger Institute for Design and the Arts and the Ira A. Fulton Schools of Engineering.

“It’s this place where boundaries between traditional domains disappear,” she said, “a transdisciplinary melting pot for innovation right in the center of engineering and the arts.”